New UN Drugs Tsar must be a Leader on Human Rights 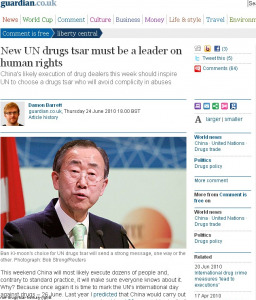 This weekend China will most likely execute dozens of people and, contrary to standard practice, it will make sure everyone knows about it. Why? Because once again it is time to mark the UN's international day against drugs – 26 June. Last year I predicted that China would carry out executions on 26 June and, sure enough, at least 20 were put to death. It was not difficult to predict. The day has served as a pretext for executions in China for many years with, as many as 50 people being executed to mark the day in some years.

In response to concerns about the death penalty, we often hear that we must respect the laws of foreign states and that this is none of our business. On 26 June 2008, however, two Nigerians were executed by firing squad for drug offences in Indonesia. They had been held in an EU/US-funded supermax prison intended for terrorists, but housing mostly drug offenders – many on death row. This raised serious concerns about where international funding is going in the so-called "war on drugs".

In 2004, Tan Xiaolin (also known as Tan Minglin) was executed to mark the UN anti-drug day. In 2008, Han Yongwan, another notorious trafficker, was executed to mark the same occasion. Both were Chinese nationals executed in China. What sets these cases apart is that these individuals were arrested with the assistance of the United Nations using international funds – in the latter case, the relevant UN programme received substantial funding from the United Kingdom and the European commission, as well as Australia, Sweden and Canada.

This week, the Guardian reported on links between the death penalty for drugs and international funding and technical assistance for counternarcotics operations through the United Nations office on drugs and crime (UNODC). Such links have been documented between a range of projects and activities in countries including Iran, China and Vietnam. A number of named individuals, such as those above, have either been sentenced to death or executed as a result of international aid and UN support.

Recently, the UNODC has begun to take notice of the impact of its counternarcotics work on human rights. Antonio Maria Costa, the current executive director, has set out a series of recommendations for internal reform intended to improve the agency's human rights performance. This leadership on human rights is very welcome, and much needed, but it may already be under threat. Costa leaves his post at the end of July. Unfortunately, the current frontrunner for the role of UN drug tsar is the candidate being pushed by the Russian government.

The candidate is Yuri Fedotov, current ambassador to the UK. But this is not about the individual except to the extent that he is a career diplomat of over 40 years' service. It is about Russia's disastrous drug policies, its appalling human rights record and despite this, a government official nonetheless taking a high-profile position of strategic importance to both issues.

Russia is no supporter of human rights scrutiny in drug control, and works to block any such progress in international political fora such as the UN commission on narcotic drugs. There are nearly 2 million people who inject drugs in Russia, and the government has abandoned them to HIV and abusive "treatments" such as "flogging therapy". Moreover, the government regularly seeks to block political progress on public health interventions such as opioid substitution therapy and needle and syringe exchange intended to fulfil their human rights. It is now estimated that 37% of people who inject drugs in Russia are HIV positive and as many as 80% of all new HIV infections in the country are due to unsafe injecting practices.

To deflect attention from this, Russia has been seeking to push the blame onto farmers in Afghanistan by calling for Nato intervention and aerial spraying of opium poppy. Experience from Colombia should indicate what terrible ideas military intervention and aerial spraying really are, where this has led to human displacement, food insecurity, health problems and increased poverty amid rising coca production rates and falling cocaine prices. What is needed is a leader on human rights, not an oppressive and abusive government's first choice.

The UN secretary-general, Ban Ki-moon, will soon make his decision and with it he will send a strong message, one way or the other. So Ban has a choice to make: a candidate that represents the current problems in the international drug control system, or one that represents leadership on human rights?

I hope, at the very least, that this weekend's killings in China to again mark a UN celebration will give him some pause for thought.